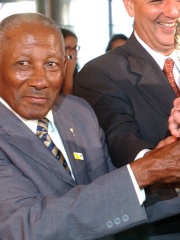 Djalma Pereira Dias dos Santos known simply as Djalma Santos (Brazilian Portuguese: [diˈʒawmɐ ˈsɐ̃tus]; also spelled Dejalma Santos), (27 February 1929 – 23 July 2013) was a Brazilian footballer who started for the Brazil national team in four World Cups, winning two, in 1958 and 1962. Santos is considered to be one of the greatest right-backs of all time. While primarily known for his defensive skills, he often ventured upfield and displayed some impressive technical and attacking skills.Along with Franz Beckenbauer and Philipp Lahm, he is one of only three players to be included into three FIFA World Cup All Star teams (in 1954, 1958 and 1962). Read more on Wikipedia

Since 2007, the English Wikipedia page of Djalma Santos has received more than 214,858 page views. His biography is available in 43 different languages on Wikipedia making him the 43rd most popular soccer player.