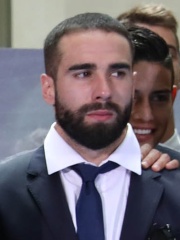 Daniel Carvajal Ramos (Spanish pronunciation: [daˈnjel ˈdani kaɾβaˈxal ˈramos]; born 11 January 1992) is a Spanish professional footballer who plays as a right back for Real Madrid and the Spanish national team. Having risen through the Real Madrid youth ranks, he spent a season with Bayer Leverkusen before breaking into the first team in 2013, going on to win various domestic and international honours including four Champions League trophies. At youth international level, Carvajal won the 2011 European Championship with the under-19 team and the 2013 edition with the under-21 side. Read more on Wikipedia

Since 2007, the English Wikipedia page of Dani Carvajal has received more than 1,439,153 page views. His biography is available in 55 different languages on Wikipedia making him the 1,596th most popular soccer player.