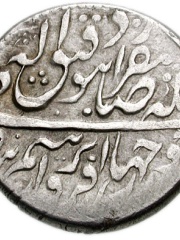 Ebrahim Mirza or Ebrahim Shah Afshar (Persian: ابراهیم‌شاه) (died 1749) was the Shah of Persia during the Afsharid Empire from July to September 1748. Born with the name Mohammad-Ali, he was the son of Ebrahim Khan Afshar (Mohammad-Ebrahim Beg), and thus Adel Shah's brother and Nader Shah's nephew. After his father's death in 1739, he took the name Ebrahim Beg. Read more on Wikipedia

Among politicians, Ebrahim Afshar ranks 7,415 out of 15,710. Before him are Elisabetta Gonzaga, Arturo Frondizi, Kashyapa, Isaac Komnenos, Bagrat IV of Georgia, and Momčilo Krajišnik. After him are Spytihněv II, Duke of Bohemia, Félix Tshisekedi, Landgravine Charlotte of Hesse-Kassel, Bezprym, Irakli Tsereteli, and Hōjō Sōun.