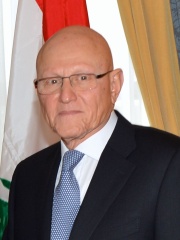 Tammam Saeb Salam (Arabic: تمّام صائب سلام, Arabic pronunciation: [tamːaːm sˤaʔɪb salaːm]; born 13 May 1945) is a Lebanese politician who was the Prime Minister of Lebanon from February 2014 until December 2016. He also served as the acting President of Lebanon from May 2014 until October 2016 in his capacity as prime minister. Read more on Wikipedia

Among politicians, Tammam Salam ranks 6,604 out of 15,577. Before him are Muhammad Shah, Zhong Yao, Daru of Baekje, Khentkaus I, Minamoto no Yoriie, and Oldřich, Duke of Bohemia. After him are Robert Todd Lincoln, Yamamoto Gonnohyōe, Ashur-nadin-shumi, Hans Martin Sutermeister, Alpha Oumar Konaré, and Prince René of Bourbon-Parma.