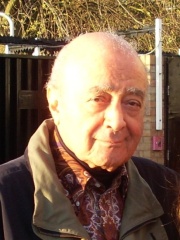 Mohamed Al-Fayed (; Egyptian Arabic: محمد الفايد [mæˈħæmmæd elˈfæːjed]; born Mohamed Fayed, 27 January 1929) is an Egyptian-born businessman whose residence and chief business interests have been in the United Kingdom since the late 1960s. Fayed's business interests include ownership of Hôtel Ritz Paris and formerly Harrods department store and Fulham F.C., both in London. Fayed's son, from his first marriage to Samira Khashoggi from 1954 to 1956, Dodi, was in a romantic relationship with Diana, Princess of Wales, when they both died in a car crash in Paris in 1997. Read more on Wikipedia

Mohamed al-Fayed is most famous for owning Harrods, the iconic London department store.

Among BUSINESSPEOPLE In Egypt

Among businesspeople born in Egypt, Mohamed Al-Fayed ranks 1. After him are Haim Saban (1944).