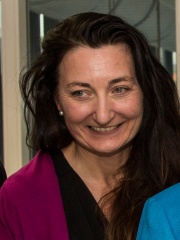 May-Britt Moser (born 4 January 1963) is a Norwegian psychologist and neuroscientist, who is a Professor of Psychology and Neuroscience at the Norwegian University of Science and Technology (NTNU). She and her then-husband, Edvard Moser, shared half of the 2014 Nobel Prize in Physiology or Medicine, awarded for work concerning the grid cells in the entorhinal cortex, as well as several additional space-representing cell types in the same circuit that make up the positioning system in the brain. Together with Edvard Moser she established the Moser research environment at NTNU, which they lead. Read more on Wikipedia

Among PHYSICIANS In Norway

Among physicians born in Norway, May-Britt Moser ranks 2. Before her are Gerhard Armauer Hansen (1841).