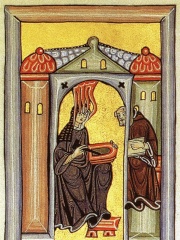 Hildegard of Bingen (German: Hildegard von Bingen; Latin: Hildegardis Bingensis; 1098 – 17 September 1179), also known as Saint Hildegard and the Sibyl of the Rhine, was a German Benedictine abbess, writer, composer, philosopher, Christian mystic, visionary, and polymath. She is one of the best-known composers of sacred monophony, as well as the most-recorded in modern history. She has been considered by many in Europe to be the founder of scientific natural history in Germany.Hildegard's fellow nuns elected her as magistra in 1136; she founded the monasteries of Rupertsberg in 1150 and Eibingen in 1165. Read more on Wikipedia

Since 2007, the English Wikipedia page of Hildegard of Bingen has received more than 1,994,154 page views. Her biography is available in 81 different languages on Wikipedia making her the 57th most popular religious figure.

Page views of Hildegard of Bingens by language

Among religious figures, Hildegard of Bingen ranks 59 out of 2,001. Before her are Jerome, Isaiah, Pope Pius IX, Joshua, Saint Anne, and Anthony the Great. After her are Samuel, Saint Lucy, Philip the Apostle, Girolamo Savonarola, Martin of Tours, and Sarah.