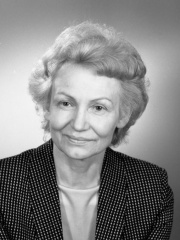 Margot Honecker (née Feist; 17 April 1927 – 6 May 2016) was an East German politician who was an influential member of that country's Communist regime until 1989. From 1963 until 1989, she was Minister of National Education (Ministerin für Volksbildung) of the GDR. She was married to Erich Honecker, the leader of East Germany's ruling Socialist Unity Party from 1971 to 1989 and concurrently from 1976 to 1989 the country's head of state. Margot Honecker was widely known as the "Purple Witch" for her tinted hair and hardline Stalinist views, and was described as "the most hated person" in East Germany next to Stasi chief Erich Mielke by former Bundestag president Wolfgang Thierse. Read more on Wikipedia

Margot Honecker was the wife of the former East German leader Erich Honecker. After the fall of the Berlin Wall, she was convicted of murder and sentenced to six years in prison for her role in the shooting deaths of East Germans who attempted to cross the border into West Germany.

Among politicians, Margot Honecker ranks 3,855 out of 15,710. Before her are Augustus, Elector of Saxony, Felix Kersten, Giovanni il Popolano, Abu'l-Khayr Khan, Suleiman ibn Qutulmish, and Raymond of Poitiers. After her are Ulrich von Jungingen, Anitta, Kim Tu-bong, Charles, Prince of Viana, Ma Ying-jeou, and Chryses of Troy.