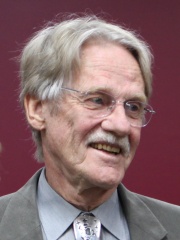 Vernon Lomax Smith (born January 1, 1927) is an American economist and professor of business economics and law at Chapman University. He is formerly a professor of economics at the University of Arizona, professor of economics and law at George Mason University, and a board member of the Mercatus Center. Along with Daniel Kahneman, Smith shared the 2002 Nobel Memorial Prize in Economic Sciences for his contributions to behavioral economics and his work in the field of experimental economics. He worked to establish 'laboratory experiments as a tool in empirical economic analysis, especially in the study of alternative market mechanisms'.Smith is the founder and president of the International Foundation for Research in Experimental Economics, a Member of the Board of Advisors for The Independent Institute, a Senior Fellow at the Cato Institute in Washington D.C. Read more on Wikipedia

Vernon L. Smith is most famous for his work on experimental economics. He has been a professor at the University of Arizona since 1969 and is the recipient of the 2002 Nobel Prize in Economics.