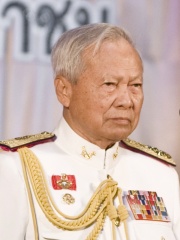 Prem Tinsulanonda (Thai: เปรม ติณสูลานนท์, RTGS: Prem Tinnasulanon, pronounced [prēːm tīn.nā.sǔː.lāː.nōn]; 26 August 1920 – 26 May 2019) was a Thai military officer, politician, and statesman who served as the Prime Minister of Thailand from 3 March 1980 to 4 August 1988, during which time he was credited with ending a communist insurgency and presiding over accelerating economic growth. As president of the Privy Council, he served as Regent of Thailand from the death of King Bhumibol Adulyadej on 13 October 2016, until the 1 December 2016 proclamation of Vajiralongkorn as King. At the age of 98, Prem was the longest-living Thai Prime Minister. He is also the oldest regent of any country, surpassing Bavarian Prince Regent Luitpold's record, when he became the regent for king Rama X. Read more on Wikipedia

Prem Tinsulanonda was a politician and general of the Thai military, and served as Prime Minister of Thailand from 1980 to 1988. He is most famous for his role in the 1991 coup that ousted the elected government of Chatichai Choonhavan.