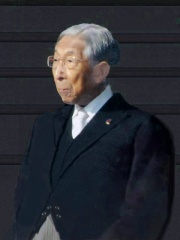 Takahito, Prince Mikasa (三笠宮崇仁親王, Mikasa-no-miya Takahito Shinnō, 2 December 1915 – 27 October 2016) was a Japanese royal, member of the Imperial House of Japan. He was the fourth and youngest son of Emperor Taishō (Yoshihito) and Empress Teimei (Sadako) and was their last surviving child. His eldest brother was Emperor Shōwa (Hirohito). Read more on Wikipedia

Since 2007, the English Wikipedia page of Takahito, Prince Mikasa has received more than 389,518 page views. His biography is available in 23 different languages on Wikipedia making him the 3,787th most popular politician.

Among politicians, Takahito, Prince Mikasa ranks 3,764 out of 14,801. Before him are Sisowath Monivong, Oswald Mosley, Ashikaga Yoshimitsu, Jacobo Árbenz, Abd al-Aziz ibn Baz, and Menahem. After him are King You of Zhou, Prince Louis, Duke of Nemours, Sancho VII of Navarre, Yang You, Agrippa Postumus, and Bagrat III of Georgia.