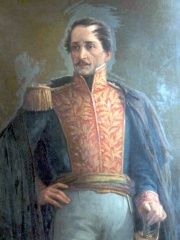 Francisco José de Paula Santander y Omaña (Villa del Rosario, Norte de Santander, Colombia, April 2, 1792 – Santafé de Bogotá, Colombia, May 6, 1840), was a Colombian military and political leader during the 1810–1819 independence war of the United Provinces of New Granada (present-day Colombia). He was the acting President of Gran Colombia between 1819 and 1826, and later elected by Congress as the President of the Republic of New Granada between 1832 and 1837. Read more on Wikipedia

Among politicians, Francisco de Paula Santander ranks 5,095 out of 15,710. Before him are Pothinus, Prince Robert, Duke of Chartres, Władysław I Herman, Manmohan Singh, Mahmud Barzanji, and Jigme Wangchuck. After him are Archduchess Adelheid of Austria, Jovan Vladimir, Tarabai, Ranjit Singh, Valentin Pavlov, and Matthias Erzberger.