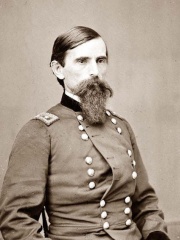 Lewis Wallace (April 10, 1827 – February 15, 1905) was an American lawyer, Union general in the American Civil War, governor of the New Mexico Territory, politician, diplomat, and author from Indiana. Among his novels and biographies, Wallace is best known for his historical adventure story, Ben-Hur: A Tale of the Christ (1880), a bestselling novel that has been called "the most influential Christian book of the nineteenth century."Wallace's military career included service in the Mexican–American War and the American Civil War. He was appointed Indiana's adjutant general and commanded the 11th Indiana Infantry Regiment. Read more on Wikipedia

Among politicians, Lew Wallace ranks 7,709 out of 15,577. Before him are Jerome Powell, Jorge Eliécer Gaitán, Meritites I, Bernardino Rivadavia, Bonar Law, and Uijong of Goryeo. After him are Anthemius, Tippu Tip, Eliza Lynch, Emperor Kameyama, Petre Roman, and John Connally.