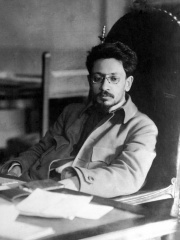 Yakov Mikhailovich Sverdlov (Russian: Яков Михайлович Свердлов; 3 June [O. S. 22 May]] 1885 – 16 March 1919) was a Bolshevik Party administrator and chairman of the All-Russian Central Executive Committee from 1917 to 1919. He is sometimes regarded as the first head of state of the Soviet Union, although it was not established until 1922, three years after his death. Born in Nizhny Novgorod to a Jewish family active in revolutionary politics, Sverdlov joined the Russian Social Democratic Labour Party in 1902 and supported Vladimir Lenin's Bolshevik faction during an ideological split. Read more on Wikipedia

Yakov Sverdlov was a Russian Bolshevik revolutionary and the first Soviet head of state. He was also the first president of the Russian Soviet Federative Socialist Republic and chairman of the Central Executive Committee of the Soviet Union.

Among politicians, Yakov Sverdlov ranks 1,988 out of 15,577. Before him are Hisham ibn Abd al-Malik, Magnus the Good, Damdin Sükhbaatar, Nicolas Fouquet, Princess Joséphine Charlotte of Belgium, and Eric the Victorious. After him are Heinrich Brüning, Princess Isabella of Parma, Victor Emmanuel I of Sardinia, Richard II, Duke of Normandy, Injong of Joseon, and Ram Nath Kovind.