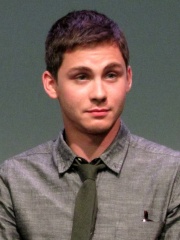 Logan Wade Lerman (born January 19, 1992) is an American actor, known for playing the title role in the fantasy-adventure Percy Jackson films. He appeared in commercials in the mid-1990s, before starring in the series Jack & Bobby (2004–2005) and the movies The Butterfly Effect (2004) and Hoot (2006). Lerman gained further recognition for his roles in the western 3:10 to Yuma, the thriller The Number 23, the comedy Meet Bill, and 2009's Gamer and My One and Only. Read more on Wikipedia

Since 2007, the English Wikipedia page of Logan Lerman has received more than 6,535,884 page views. His biography is available in 44 different languages on Wikipedia making him the 3,985th most popular actor.