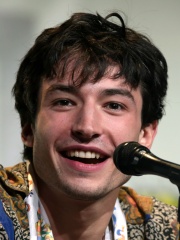 Independent
Ezra Miller: Everything we know about the controversial Hollywood actor
From ‘Fantastic Beasts and Where To Find Them’ to their recent arrests, Tom Murray looks at the career and controversies of this once-promising movie star
Tom Murray
Independent
Ezra Miller has cult-like control over Tokata Iron Eyes, parents tell The Independent: ‘I know where it ends’
Tokata Iron Eyes’ parents tell Bevan Hurley they fear the 18-year-old’s life is in danger. ‘I’ve seen this type of trainwreck before, I know where it ends,’ Chase Iron Eyes says
Bevan Hurley
Newsweek
Ezra Miller Offers to 'Knock Out' Retail Worker in Resurfaced TikTok
It's unclear whether DC Comics actor Ezra Miller is joking in the video, which has been viewed millions of times across social media.
Jamie Burton
Inside the Magic
DC’s Ezra Miller Offers to “Knock You Out,” Threatens Fan While Running From Law
Justice League (2021) actor Ezra Miller has been entangled with controversy after controversy, most recently being on the run from U.S. Law enforcement. Now, the actor has randomly appeared in a supermarket and threatened to knock out a fan. Related: Ezra Mil…
Alex Lue