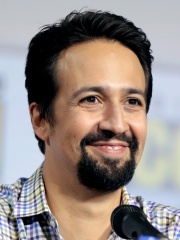 Lin-Manuel Miranda (born January 16, 1980) is an American composer, lyricist, actor, singer, rapper, producer, and playwright, widely known for creating and starring in the Broadway musicals In the Heights and Hamilton. His awards include a Pulitzer Prize, three Tony Awards, three Grammy Awards, an Emmy Award, a MacArthur Fellowship, and a Kennedy Center Honor in 2018. Miranda wrote the music and lyrics for the 2008 Broadway musical In the Heights. Read more on Wikipedia

Since 2007, the English Wikipedia page of Lin-Manuel Miranda has received more than 18,050,294 page views. His biography is available in 29 different languages on Wikipedia making him the 6,483rd most popular actor.

Among actors, Lin-Manuel Miranda ranks 6,441 out of 8,832. Before him are Lenna Kuurmaa, Karla Álvarez, Park Jin-young, Dean O'Gorman, Nadine Velazquez, and Paresh Rawal. After him are Sandra Hüller, Saskia Reeves, Justina Machado, Mo'Nique, Dacre Montgomery, and Erik Per Sullivan.