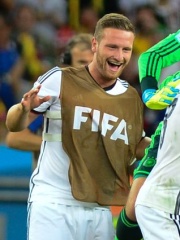 Shkodran Mustafi (German pronunciation: [ˈʃkoːdʁan ˈmʊstafiː]; born 17 April 1992) is a German professional footballer who plays as a centre-back for English Premier League club Arsenal and the Germany national team. Mustafi began his career in the youth ranks of Hamburger SV and English club Everton, where he made one substitute appearance in ​2 1⁄2 years before leaving to Sampdoria in January 2012. Read more on Wikipedia

Since 2007, the English Wikipedia page of Shkodran Mustafi has received more than 2,874,096 page views. His biography is available in 56 different languages on Wikipedia making him the 3,265th most popular soccer player.