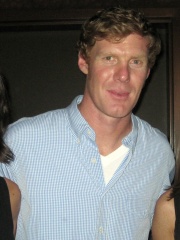 Panayotis Alexander "Alexi" Lalas (Greek: Αλέξης Λάλας; born June 1, 1970) is an American retired soccer player who played mostly as a defender. Lalas is best known for his participation with the United States men's national soccer team in the 1994 FIFA World Cup, where he was a standout player on the team with his distinctive long beard and hair. After the World Cup, Lalas went on to become the first American in Italy's Serie A as a member of Calcio Padova.Lalas would later return to the United States in 1996 to take part in the newly formed Major League Soccer, as a member of New England Revolution. Lalas also played with Club Sport Emelec of Ecuador, and the MLS squads MetroStars and Kansas City Wizards, but his most successful period was with Los Angeles Galaxy, with whom he won the CONCACAF Champions' Cup, Lamar Hunt U.S. Read more on Wikipedia