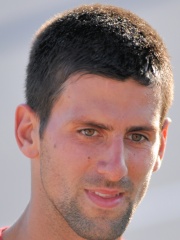 Novak Djokovic (Serbian: Новак Ђоковић, romanized: Novak Đoković, pronounced [nôʋaːk dʑôːkoʋitɕ] (listen); born 22 May 1987) is a Serbian professional tennis player who is currently ranked world No. 1 in men's singles tennis by the Association of Tennis Professionals (ATP).Djokovic has won 17 Grand Slam singles titles, the third-most in history for a male player, five ATP Finals titles, a record 36 ATP Tour Masters 1000 titles, 14 ATP Tour 500 titles, and has held the No. 1 spot in the ATP rankings for a total of 288 weeks (second of all time). Read more on Wikipedia

Since 2007, the English Wikipedia page of Novak Djokovic has received more than 22,791,176 page views. His biography is available in 127 different languages on Wikipedia making him the 2nd most popular tennis player.

Among TENNIS PLAYERS In Serbia