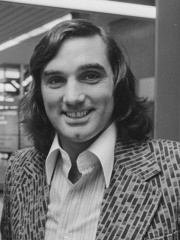 George Best (22 May 1946 – 25 November 2005) was a Northern Irish professional footballer who played as a winger, spending most of his club career at Manchester United. Named European Footballer of the Year in 1968, he is regarded as one of the greatest players of all time. A highly skilful winger, considered by several pundits to be one of the greatest dribblers in the history of the sport, Best received plaudits for his playing style, which combined pace, skill, balance, feints, two-footedness, goalscoring and the ability to get past defenders.In international football, Best was capped 37 times for Northern Ireland between 1964 and 1977. Read more on Wikipedia

Since 2007, the English Wikipedia page of George Best has received more than 5,345,948 page views. His biography is available in 61 different languages on Wikipedia making him the 12th most popular soccer player.