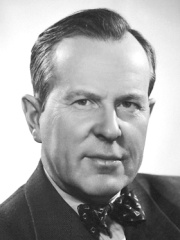 Lester Bowles "Mike" Pearson (23 April 1897 – 27 December 1972) was a Canadian scholar, statesman, diplomat, and politician who served as the 14th prime minister of Canada from 1963 to 1968. Born in Newtonbrook, Ontario (now part of Toronto), Pearson pursued a career in the Department of External Affairs. He served as Canadian ambassador to the United States from 1944 to 1946 and secretary of state for external affairs from 1948 to 1957 under Liberal Prime Ministers William Lyon Mackenzie King and Louis St. Read more on Wikipedia

Page views of Lester B. Pearsons by language

Among politicians, Lester B. Pearson ranks 5,911 out of 15,710. Before him are Magnus, Duke of Saxony, Constantine Phaulkon, Bechara El Khoury, Seleucus V Philometor, Samori Ture, and Johannes Steinhoff. After him are Emperor Go-Horikawa, Manuel Gomes da Costa, Abd al-Hafid of Morocco, Peter II of Courtenay, Henry II, Duke of Brabant, and Hedwig Jagiellon, Duchess of Bavaria.