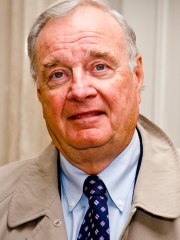 Paul Edgar Philippe Martin (born August 28, 1938), also known as Paul Martin Jr., is a Canadian politician who served as the 21st prime minister of Canada from December 12, 2003, to February 6, 2006. Martin served as the Member of Parliament for the riding of LaSalle—Émard in Montreal from his election in the 1988 election to his retirement in 2008. He served as minister of Finance from 1993 to 2002. Read more on Wikipedia

Since 2007, the English Wikipedia page of Paul Martin has received more than 1,056,923 page views. His biography is available in 54 different languages on Wikipedia making him the 8,008th most popular politician.

Among politicians, Paul Martin ranks 7,964 out of 14,801. Before him are Tamim bin Hamad Al Thani, Julia, Stephen Držislav of Croatia, Ralph I, Count of Vermandois, Assaracus, and Appius Claudius Pulcher. After him are Leopoldo O'Donnell, 1st Duke of Tetuán, Ashur-nadin-shumi, Peter the Patrician, Hosokawa Tadaoki, Augusta of Denmark, and Adolphus Frederick VI, Grand Duke of Mecklenburg-Strelitz.