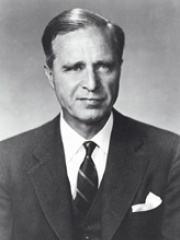 Prescott Sheldon Bush (May 15, 1895 – October 8, 1972) was an American banker and politician. After working as a Wall Street executive investment banker, he represented Connecticut in the United States Senate from 1952 to 1963. A member of the Bush family, he was the father of former Vice President and President George H. W. Bush, and the paternal grandfather of former Texas Governor and President George W. Bush and former Florida Governor Jeb Bush.Born in Columbus, Ohio, Bush graduated from Yale College and served as an artillery officer during World War I. After the war, he worked for several companies, becoming a minor partner of the A. Harriman & Co. Read more on Wikipedia

Among politicians, Prescott Bush ranks 6,259 out of 15,710. Before him are Emperor Wenxuan of Northern Qi, Marcello Tegalliano, Gerolama Orsini, Marie de Bourbon, Duchess of Montpensier, Az-Zahir, and Christian August II, Duke of Schleswig-Holstein-Sonderburg-Augustenburg. After him are Carlos Lacoste, Vímara Peres, Birutė, Morihiro Hosokawa, Alain Juppé, and Emperor Daozong of Liao.