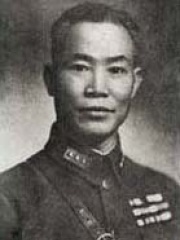 Chen Cheng ([ʈʂʰə̌n ʈʂʰə̌ŋ]; Chinese: 陳誠; pinyin: Chén Chéng; January 4, 1897 – March 5, 1965) was a Chinese political and military leader, and one of the main commanders of the National Revolutionary Army during the Second Sino-Japanese War and the Chinese Civil War. After moving to Taiwan at the end of the civil war, he served as the Governor of Taiwan Province, Vice President, and Premier of the Republic of China (ROC). Read more on Wikipedia

Among politicians, Chen Cheng ranks 6,576 out of 15,710. Before him are Abdal-Latif Mirza, Michael of Chernigov, François de Neufville, duc de Villeroy, Arete, Willi Münzenberg, and Margravine Louise Charlotte of Brandenburg. After him are Archduke Johann Salvator of Austria, Ali az-Zahir, Ahmed Shafik, Abaris the Hyperborean, Srinagarindra, and Phriapatius.