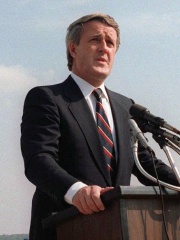 Martin Brian Mulroney (; born March 20, 1939) is a retired Canadian politician who served as the 18th prime minister of Canada from September 17, 1984, to June 25, 1993.His tenure as prime minister was marked by the introduction of major economic reforms, such as the Canada-U.S. Free Trade Agreement and the Goods and Services Tax. Prior to his political career, he was a prominent lawyer and businessman in Montreal. He later ran for the Progressive Conservatives and won in a landslide in the 1984 Canadian federal election, defeating John Turner of the Liberals and Ed Broadbent of the NDP, not only winning every single province and territory but also capturing over 50% of the vote for the first time since 1958 and increasing his party's seats by 111, up to 211 seats, the highest amount of seats won by any party in Canadian history. Read more on Wikipedia

Among politicians, Brian Mulroney ranks 9,586 out of 15,710. Before him are Cai E, Prince Friedrich Leopold of Prussia, Thoros II, Prince of Armenia, Arvid Lindman, Ferdinand Albert I, Duke of Brunswick-Wolfenbüttel-Bevern, and Sobekemsaf I. After him are Dara Shukoh, Bertrand Delanoë, Viktor Kingissepp, Charles Stewart Parnell, Oqil Oqilov, and Ashur-resh-ishi II.