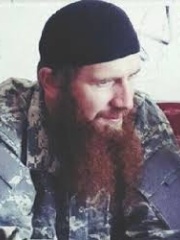 Tarkhan Tayumurazovich Batirashvili (Georgian: თარხან ბათირაშვილი; 11 January 1986 – 10 July 2016), known by his nom de guerre Abu Omar al-Shishani (Arabic: أَبُو عُمَرَ ٱلشِّيشَانِيِّ‎, romanized: ʾAbū ʿUmar aš-Šīšānī) or Omar al-Shishani, was a Georgian Chechen jihadist who served as a commander for the Islamic State of Iraq and Syria, and was previously as a sergeant in the Georgian Army.A veteran of the 2008 Russo-Georgian War, Batirashvili became a jihadist after being discharged from the Georgian military and served in various command positions with Islamist militant groups fighting in the Syrian Civil War. He became the leader of the Syrian rebel group Muhajireen Brigade (Emigrants Brigade), and its successor, Jaish al-Muhajireen wal-Ansar (Army of Emigrants and Supporters). Read more on Wikipedia

Among MILITARY PERSONNELS In Georgia

Among military personnels born in Georgia, Abu Omar al-Shishani ranks 3. Before him are Aleksei Brusilov (1853) and Meliton Kantaria (1920).