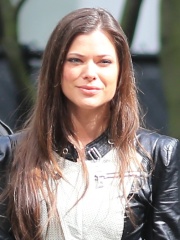 Peyton List (born August 8, 1986) is an American actress and professional model, known for roles on Mad Men, FlashForward, The Tomorrow People and Frequency. She began her career on daytime television, playing Lucy Montgomery on the CBS soap opera As the World Turns from 2001 to 2005, before she went to primetime with regular roles on the short-lived dramas Windfall (2006) and Big Shots (2007). From 2008 to 2013, List had a recurring role as Jane Siegel in the AMC period drama Mad Men. Read more on Wikipedia

Since 2007, the English Wikipedia page of Peyton List has received more than 380,525 page views. Her biography is available in 22 different languages on Wikipedia making her the 5,217th most popular actor.