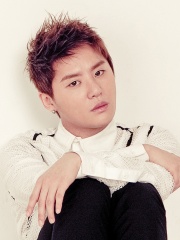 Kim Jun-su (Korean: 김준수; Hanja: 金俊秀; born December 15, 1986) or simply Junsu, also known by the stage name Xia (stylized as XIA; SHEE-ah; Korean: 시아) is a South Korean singer, model, dancer and stage actor. He is a member of the Korean pop group and later duo JYJ, and was one of the original members of boy band TVXQ. Kim made his debut in 2003 as a member of TVXQ, a boy band produced and formed by South Korean record label and talent agency SM Entertainment, having previously been a trainee for six years. He had released four Korean albums, four Japanese albums, thirty Japanese singles and several Korean singles during his first six years in the music industry as TVXQ. In 2009, Kim and fellow TVXQ members Kim Jaejoong and Park Yoochun filed a lawsuit against SM Entertainment, arguing that their exclusive contracts were unilaterally disadvantageous towards the artists and should be invalidated. Read more on Wikipedia