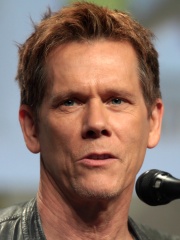 Kevin Norwood Bacon (born July 8, 1958) is an American actor. His films include the musical-drama film Footloose (1984), the controversial historical conspiracy legal thriller JFK (1991), the legal drama A Few Good Men (1992), the historical docudrama Apollo 13 (1995), and the mystery drama Mystic River (2003). Bacon is also known for voicing the title character in Balto (1995), and was taking on darker roles, such as that of a sadistic guard in Sleepers (1996), and troubled former child abuser in The Woodsman (2004). Read more on Wikipedia

Kevin Bacon is most famous for his role in the film Footloose, where he plays a rebellious teenager who moves to a small town where dancing and rock music are banned.