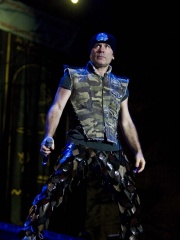 Paul Bruce Dickinson (born 7 August 1958) is an English singer, songwriter, musician, airline pilot, author, and broadcaster. He is best known for his work as the lead singer of the heavy metal band Iron Maiden since 1981, and is renowned for his wide-ranging operatic vocal style and energetic stage presence. Dickinson began his career in music fronting small pub bands in the 1970s while attending school in Sheffield and university in London. Read more on Wikipedia

Since 2007, the English Wikipedia page of Bruce Dickinson has received more than 3,916,300 page views. His biography is available in 53 different languages on Wikipedia making him the 123rd most popular singer.