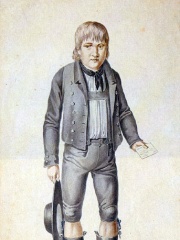 Kaspar Hauser (30 April 1812 – 17 December 1833) was a German youth who claimed to have grown up in the total isolation of a darkened cell. Hauser's claims, and his subsequent death from a stab wound to his left breast, sparked much debate and controversy. Theories propounded at the time identified him as a member of the grand ducal House of Baden, hidden away because of royal intrigue. Read more on Wikipedia

Since 2007, the English Wikipedia page of Kaspar Hauser has received more than 1,689,912 page views. His biography is available in 36 different languages on Wikipedia (up from 35 in 2019). Kaspar Hauser is the 6th most popular celebrity (down from 5th in 2019).

Kaspar Hauser was a German boy who was found in 1828 in Nuremberg, Germany. He was unable to speak or walk and had to be carried everywhere. He claimed that he had been kept in a dark dungeon for most of his life and had been given only bread and water.