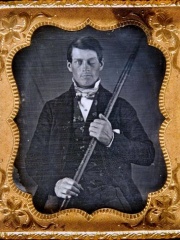 Phineas P. Gage (1823–1860) was an American railroad construction foreman remembered for his improbable[B1]: 19  survival of an accident in which a large iron rod was driven completely through his head, destroying much of his brain's left frontal lobe, and for that injury's reported effects on his personality and behavior over the remaining 12 years of his life‍—‌effects sufficiently profound that friends saw him (for a time at least) as "no longer Gage". [H]: 14  Long known as the "American Crowbar Case"‍—‌once termed "the case which more than all others is cal­cu­lated to excite our wonder, impair the value of prognosis, and even to subvert our phys­i­o­log­i­cal doctrines" ‍—‌Phineas Gage influenced 19th-century discussion about the mind and brain, par­tic­u­larly debate on cerebral local­i­za­tion,​​[M]: ch7-9 [B] and was perhaps the first case to suggest the brain's role in deter­min­ing per­son­al­ity, and that damage to specific parts of the brain might induce specific mental changes. Gage is a fixture in the curricula of neurology, psychology, and neuroscience,​​[M7]: 149  one of "the great medical curiosities of all time"[M8] and "a living part of the medical folklore" [R]: 637  frequently mentioned in books and scientific papers;[M]: ch14  he even has a minor place in popular culture. Despite this celebrity, the body of established fact about Gage and what he was like (whether before or after his injury) is small, which has allowed "the fitting of almost any theory [desired] to the small number of facts we have" [M]: 290 ‍—‌Gage acting as a "Rorschach inkblot"  in which proponents of various conflicting theories of the brain all saw support for their views. Read more on Wikipedia

Phineas Gage is most famous for being the first person to have a metal rod go through his brain. This accident happened when he was working as a railroad construction supervisor. The rod went through his left cheek and exited through the top of his head.