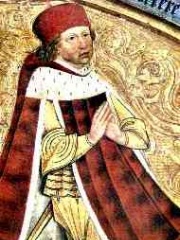 Albert III (German: Albrecht III.) (9 November 1414 – 11 March 1486) was Elector of Brandenburg from 1471 until his death, the third from the House of Hohenzollern. A member of the Order of the Swan, he received the cognomen Achilles because of his knightly qualities and virtues. Read more on Wikipedia

Albrecht III Achilles, Elector of Brandenburg, was a member of the House of Hohenzollern and the first Margrave of Brandenburg. He was the son of Albert II Achilles and Margaret of Austria.

Among noblemen, Albrecht III Achilles, Elector of Brandenburg ranks 179 out of 843. Before him are Grand Duke Konstantin Nikolayevich of Russia, Prince Bertil, Duke of Halland, Maria Anna Victoria of Bavaria, Christina of Denmark, Arthur I, Duke of Brittany, and Jobst of Moravia. After him are Ismihan Sultan, Elizabeth of Austria, Prince Leopold of Bavaria, Daniel of Moscow, Charles, Count of Angoulême, and Grand Duke Paul Alexandrovich of Russia.

Among noblemen born in Germany, Albrecht III Achilles, Elector of Brandenburg ranks 19. Before him are Maria Anna of Bavaria (1574), Frederick, Prince of Wales (1707), Princess Marie of Hohenzollern-Sigmaringen (1845), Rupprecht, Crown Prince of Bavaria (1869), Duchess Mathilde Ludovika in Bavaria (1843), and Maria Anna Victoria of Bavaria (1660). After him are Prince Leopold of Bavaria (1846), Duchess Marie of Mecklenburg-Schwerin (1854), Landgravine Elisabeth Amalie of Hesse-Darmstadt (1635), Infanta Maria Theresa of Portugal (1855), Duchess Cecilie of Mecklenburg-Schwerin (1886), and Princess Juliane of Saxe-Coburg-Saalfeld (1781).