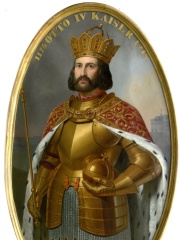 Since 2007, the English Wikipedia page of Otto IV, Holy Roman Emperor has received more than 288,247 page views. His biography is available in 45 different languages on Wikipedia making him the 942nd most popular politician.

Among politicians, Otto IV, Holy Roman Emperor ranks 937 out of 14,801. Before him are Christian III of Denmark, Haakon VII of Norway, Geta, Chongzhen Emperor, Bolesław I the Brave, and Lysimachus. After him are Şehzade Cihangir, Dongmyeong of Goguryeo, Djedefre, Constantine IV, Den, and Emperor Xuanzong of Tang.

Among people born in 1175, Otto IV, Holy Roman Emperor ranks 2. Before him is Andrew II of Hungary. After him are Subutai, Agnes of Merania, Robert Grosseteste, Raymond of Penyafort, Yolanda of Flanders, Comtessa de Dia, Frederick I, Duke of Austria, Alexander of Hales, Roger III of Sicily, and Albert I, Duke of Saxony. Among people deceased in 1218, Otto IV, Holy Roman Emperor ranks 1. After him are Simon de Montfort, 5th Earl of Leicester, Jayavarman VII, Al-Adil I, Odo III, Duke of Burgundy, Hugh I of Cyprus, Robert II, Count of Dreux, Theresa of Portugal, Countess of Flanders, Berthold V, Duke of Zähringen, Konstantin of Rostov, and Theobald VI, Count of Blois.