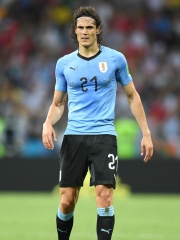 Edinson Roberto Cavani Gómez (Spanish pronunciation: [ˈeðinsoŋ kaˈβani]; born 14 February 1987) is a Uruguayan professional footballer who plays as a striker for La Liga club Valencia and the Uruguay national team. Nicknamed El Matador ('The Bullfighter'), being known for his intelligent movement off the ball, clinical finishing, and heading ability. Cavani began his career playing for Danubio in Montevideo, where he played for two years, before moving to Italian side Palermo in 2007. Read more on Wikipedia

Edinson Cavani is a professional footballer who plays as a striker for Paris Saint-Germain and the Uruguay national team. He is known for his goalscoring ability and is considered one of the best forwards in the world. Cavani began his career at Uruguayan club Danubio before moving to Italian side Palermo in 2007. He spent four seasons in Italy before signing with Paris Saint-Germain in 2013, where he has become the club's all-time leading goalscorer. Cavani has also enjoyed success with the Uruguay national team, helping the team reach the semifinals of the 2010 and 2014 FIFA World Cups.