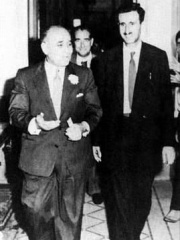 Kamal Bek Jumblatt (Arabic: كمال بك جنبلاط‎; 6 December 1917 – 16 March 1977) was a prominent Lebanese politician, philosopher, author, and poet. He is the founder of the Progressive Socialist Party and leader of the Lebanese National Movement which opposed the right-wing political parties backed by the Syrian government during the early years of the Lebanese Civil War. He was a major ally of the Palestine Liberation Organization until his assassination in 1977. Read more on Wikipedia

Since 2007, the English Wikipedia page of Kamal Jumblatt has received more than 168,278 page views. His biography is available in 19 different languages on Wikipedia making him the 6,834th most popular politician.

Among politicians, Kamal Jumblatt ranks 6,793 out of 14,801. Before him are Balak, Djedkare Shemai, Henry A. Wallace, Mikhail Semyonovich Vorontsov, Philip Prospero, Prince of Asturias, and Christian Ludwig Brehm. After him are Duarte Nuno, Duke of Braganza, Gülçiçek Hatun, Ammi-Ditana, Kim Seong-su, Walter Simons, and Thusnelda.