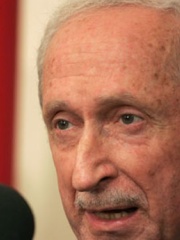 Omar Abdul Hamid Karami (last name also spelled Karamé and Karameh) (Arabic: عمر عبد الحميد كرامي‎; 7 September 1934 – 1 January 2015) was the 29th Prime Minister of Lebanon, who served two separate terms. He was Prime Minister for the first time from 24 December 1990, when Selim al-Hoss gave up power, until May 1992, when he resigned due to economic instability. Read more on Wikipedia

Since 2007, the English Wikipedia page of Omar Karami has received more than 63,413 page views. His biography is available in 29 different languages on Wikipedia making him the 6,931st most popular politician.

Among politicians, Omar Karami ranks 6,890 out of 14,801. Before him are Ariobarzanes of Pontus, Maria Anna Sophia of Saxony, Fritz Fischer, Prince Louis Ferdinand of Prussia, Arioald, and Alfred Escher. After him are Infanta Cristina of Spain, Dries van Agt, Jorge Eliécer Gaitán, Louis VIII, Landgrave of Hesse-Darmstadt, Gnaeus Domitius Ahenobarbus, and Princess Margaret of Denmark.