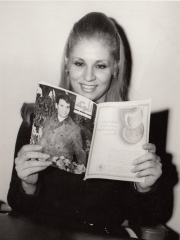 Sabah (Arabic: صباح‎ Ṣabāḥ Lebanese pronunciation: [sˤɑˈbaːħ]; born Janet Gerges Feghali, جانيت جرجس فغالي; 10 November 1927 – 26 November 2014) was a Lebanese singer and actress. Nicknamed Shahruret-el Wadi, شحرورة الوادي, (meaning the Songbird of the Valley, based upon her region of origin, Wadi Chahrour also called Ourrouar) in the Arab world, she released over 50 albums and acted in 98 movies as well as over 20 Lebanese stage plays. She had a reported repertoire of over 3,500 songs. Read more on Wikipedia

Page views of Sabahs by language

Among singers, Sabah ranks 397 out of 3,541. Before her are Marc Anthony, Arsen Dedić, Dino Merlin, Anggun, Natalia Oreiro, and Janet Jackson. After her are Seal, Googoosh, Cecilia Bartoli, Percy Sledge, Lill-Babs, and Monica Zetterlund.

Among SINGERS In Lebanon