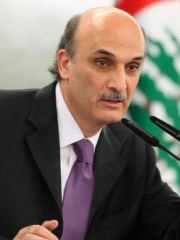 Samir Farid Geagea (Arabic: سمير فريد جعجع‎ Lebanese pron.: [saˈmiːɾ faˈɾiːd ˈʒaʕʒaʕ], also spelled Samir Ja'ja'; born 25 October 1952) is a Lebanese politician and militia commander who serves as the executive chairman of the Lebanese Forces since 1986. Born in Ain al-Remaneh with origins from Bsharri, Geagea joined Kataeb Party in his early years. In 1978, during the Lebanese Civil War, he participated in the Ehden massacre, where he led troops that killed Tony Frangieh, leader of Marada militia, and his family. Read more on Wikipedia

Since 2007, the English Wikipedia page of Samir Geagea has received more than 350,284 page views. His biography is available in 17 different languages on Wikipedia. Samir Geagea is the 9,641st most popular politician (up from 10,500th in 2019), the 66th most popular biography from Lebanon and the 32nd most popular Lebanese Politician.

Among politicians, Samir Geagea ranks 9,641 out of 15,710. Before him are Publius Sulpicius Galba Maximus, Zail Singh, Panteleimon Ponomarenko, Ismail al-Azhari, Creoda of Mercia, and Madan Mohan Malaviya. After him are Princess Sophia of the United Kingdom, Wiglaf of Mercia, Jules Wijdenbosch, Pietro Tribuno, Zipoetes I of Bithynia, and Beata Szydło.