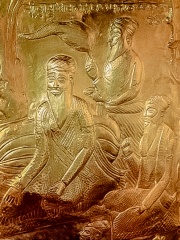 Guru Arjan (Gurmukhi: ਗੁਰੂ ਅਰਜਨ, pronunciation: [gʊɾuː əɾd͡ʒənᵊ]; 15 April 1563 – 30 May 1606) was the first of the two Gurus martyred in the Sikh faith and the fifth of the ten total Sikh Gurus. He compiled the first official edition of the Sikh scripture called the Adi Granth, which later expanded into the Guru Granth Sahib. He was born in Goindval, in the Punjab, the youngest son of Bhai Jetha, who later became Guru Ram Das, and Mata Bhani, the daughter of Guru Amar Das. Read more on Wikipedia

Among religious figures, Guru Arjan ranks 1,083 out of 2,238. Before him are Günter Guillaume, George Syncellus, Raymond Nonnatus, John of Montecorvino, Dom Justo Takayama, and Suhayb ar-Rumi. After him are Franz Jägerstätter, Vincent of Lérins, Johann Arndt, Fidelis of Sigmaringen, Paul Marcinkus, and Maria Schicklgruber.