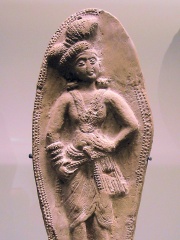 Pushyamitra Shunga (IAST: Puṣyamitra Śuṅga) (ruled c. 185 – c. 149 BCE) was the founder and first ruler of the Shunga Empire which he established by rebelling against Maurya Empire. He was a follower of Hinduism and is known for reestablishing the original Hindu rule in North India. Pushyamitra was originally a Senapati "General" of the Maurya Empire. Read more on Wikipedia

Among politicians, Pushyamitra Shunga ranks 6,419 out of 15,710. Before him are Cynane, Ramon Berenguer II, Count of Barcelona, Talabuga, Yasovarman I, William, Prince of Hohenzollern, and Fritz Fischer. After him are Princess Elisabeth of Savoy, Sindae of Goguryeo, Democedes, Floriano Peixoto, Dinarchus, and Emperor Tianzuo of Liao.

Among people born in 300 BC, Pushyamitra Shunga ranks 24. Before him are Gaius Claudius Nero, Arsaces II of Parthia, Appius Claudius Caudex, Wiman of Gojoseon, Mithridates II of Pontus, and Tiberius Sempronius Gracchus. After him are Mithridates III of Pontus, Herodas, Xanthippus of Carthage, Aristo of Chios, Marcus Minucius Rufus, and Gaius Laelius. Among people deceased in 148 BC, Pushyamitra Shunga ranks 2. Before him is Masinissa. After him are Marcus Claudius Marcellus and Lucius Calpurnius Piso Caesoninus.

Others Deceased in 148 BC