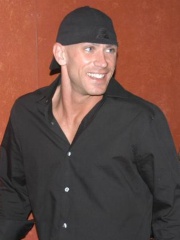 Steven Wolfe (born December 31, 1978), better known as Johnny Sins, is an American pornographic actor, director, and YouTuber. Noted for his shaved head and muscular physique, he is consistently among the most popular pornography searches. Read more on Wikipedia

Since 2007, the English Wikipedia page of Johnny Sins has received more than 4,629,915 page views. Her biography is available in 22 different languages on Wikipedia making her the 10,807th most popular pornographic actor.

Most Popular Pornographic Actors in Wikipedia