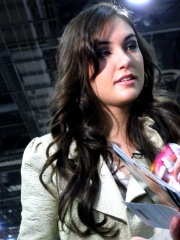 Sasha Grey (born Marina Ann Hantzis, March 14, 1988) is an American actress, musician, and model. Grey began her acting career in the pornographic film industry, winning 15 awards for her work between 2007 and 2010, including the AVN Award for Female Performer of the Year in 2008.Grey has been featured in music videos, documentaries, advertising campaigns, artworks, and magazines. After her 2009 feature film debut as the lead in Steven Soderbergh's The Girlfriend Experience, she starred in independent films including Open Windows, the Canadian black comedy horror film Smash Cut and the horror film Would You Rather. Read more on Wikipedia

Since 2007, the English Wikipedia page of Sasha Grey has received more than 10,505,479 page views. Her biography is available in 55 different languages on Wikipedia making her the 18th most popular pornographic actor.

Most Popular Pornographic Actors in Wikipedia

Among PORNOGRAPHIC ACTORS In United States