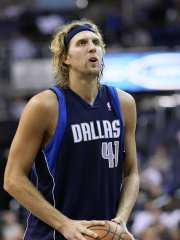 Dirk Werner Nowitzki (German pronunciation: [ˈdɪʁk ˈvɛʁnɐ noˈvɪtski]) (born June 19, 1978) is a German former professional basketball player. Listed at 7 ft 0 in (2.13 m), he is widely regarded as one of the best power forwards of all time and is considered by many to be the greatest European player of all time.An alumnus of the DJK Würzburg basketball club, Nowitzki was chosen as the ninth pick in the 1998 NBA draft by the Milwaukee Bucks and was immediately traded to the Dallas Mavericks, where he played his entire 21-year National Basketball Association (NBA) career. Nowitzki led the Mavericks to 15 NBA playoff appearances (2001–2012; 2014–2016), including the franchise's first Finals appearance in 2006 and its only NBA championship in 2011. Read more on Wikipedia

Since 2007, the English Wikipedia page of Dirk Nowitzki has received more than 7,716,939 page views. His biography is available in 53 different languages on Wikipedia making him the 26th most popular basketball player.

Among BASKETBALL PLAYERS In Germany