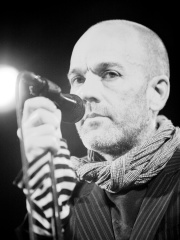 John Michael Stipe (born January 4, 1960) is an American singer-songwriter best known as the lead singer and lyricist of alternative rock band R.E.M. throughout its history. He is known for his distinctive vocal quality, poetic lyrics and unique stage presence. Possessing a distinctive voice, Stipe has been noted for the "mumbling" style of his early career. Since the mid 1980s, Stipe sings in "wailing, keening, arching vocal figures" that R.E.M. Read more on Wikipedia

Since 2007, the English Wikipedia page of Michael Stipe has received more than 3,373,075 page views. His biography is available in 35 different languages on Wikipedia making him the 651st most popular musician.

Among musicians, Michael Stipe ranks 651 out of 2,258. Before him are András Schiff, Vinnie Vincent, Kid Ory, David A. Stewart, Nick Simper, and James Burton. After him are Alan Price, Ron McGovney, Diana Krall, Tim Buckley, Tommy Emmanuel, and Jenő Hubay.