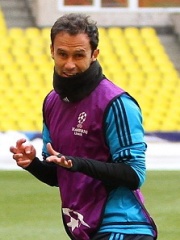 Ricardo Alberto Silveira de Carvalho OIH (Portuguese pronunciation: [ʁiˈkaɾðu kɐɾˈvaʎu]; born 18 May 1978) is a retired Portuguese professional footballer who played as a centre back. He is widely considered one of the greatest center backs from the modern era. He is currently the assistant manager of French club Marseille.Carvalho began his career at Porto, where he had loan spells at Leça, Vitória de Setúbal and Alverca, before winning domestic and European trophies under José Mourinho's management. Read more on Wikipedia

Since 2007, the English Wikipedia page of Ricardo Carvalho has received more than 1,504,866 page views. His biography is available in 60 different languages on Wikipedia making him the 748th most popular soccer player.