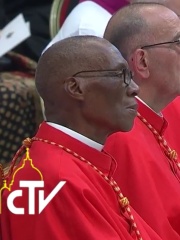 Jean Zerbo (born 27 December 1943) is a Malian Roman Catholic prelate who has served as Archbishop of Bamako since 1998. Pope Francis raised him to the rank of Cardinal on 28 June 2017. Read more on Wikipedia

Since 2007, the English Wikipedia page of Jean Zerbo has received more than 13,011 page views. His biography is available in 16 different languages on Wikipedia making him the 1,656th most popular religious figure.

Among religious figures, Jean Zerbo ranks 1,656 out of 2,001. Before him are Elizabeth Bolden, Sergio Sebastiani, Bernard Panafieu, Maironis, Vladimír Holan, and Wilfrid. After him are Joseph Vaz, Theodorus Lector, Constantine VI of Constantinople, Geraldo Majella Agnelo, Polyeuctus of Constantinople, and Ricardo Blázquez.