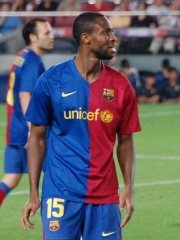 Seydou Keïta (anglicised to Keita; born 16 January 1980) is a Malian former footballer. A versatile midfielder, he operated as both a central or defensive midfielder. He most notably played for Lens (five seasons) and Barcelona (four), winning 14 titles with the latter club after signing in 2008. Read more on Wikipedia

Since 2007, the English Wikipedia page of Seydou Keita has received more than 455,451 page views. His biography is available in 42 different languages on Wikipedia making him the 1,305th most popular soccer player.