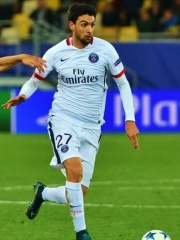 Javier Matías Pastore (Spanish pronunciation: [xaˈβjeɾ maˈti.as pasˈtoɾe]; born 20 June 1989) is an Argentine footballer who plays as an attacking midfielder for Serie A club Roma and the Argentina national team. Pastore began his club career with Talleres and then Huracán in his native Argentina before moving to Serie A team Palermo in 2009 for a reported transfer fee of €4.7 million. In 2011, French side Paris Saint-Germain bought him for a reported €39.8 million. Read more on Wikipedia

Since 2007, the English Wikipedia page of Javier Pastore has received more than 1,360,127 page views. His biography is available in 44 different languages on Wikipedia making him the 1,991st most popular soccer player.